Is Hungary a democracy or dictatorship? 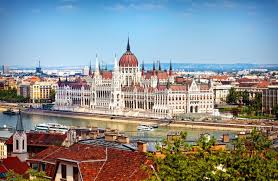 Orbán Viktor won in the general election of Hungary in April 8th 2018. This means that Orbán and the right-wing party, Fidesz-Magyar Polgári Szövetség which is headed by Orbán and has the tendency for “illiberalism” that means democracy is based on the the nation state or Christian values according to Orbán would have the power to amend the constitution and put down political adversaries for 4 years out. According to the professor of Harvard University, Yasha Munch, it is almost impossible to recession of democracy in this situation because Orbán can amend the constitution for his own advantage, control the universities or abolish the highest court through legislature and there would be very few chances for opposition forces to win out over Orbán in the election after this win.
Stats of Viewpoints
There are pros and cons in Hungary.
0 agrees
0 disagrees
Viewpoints
Add New Viewpoint

There are pros and cons in Hungary.

The Organization for Security and Co-operation in Europe (OSCE) insisted that Fidesz has suppressed true political competition in Hungary and has criticized this election. OSCE also stated that the opposition forces could not fight on even ground because the country and the governing party were working with coalition in this election in April 8th because the electors could not make a good selection because the places for political debate were limited and they could not get enough information for vote due to deflection of media or opaque of political funds even though the electors had the wide-range political choices. Some are critical of.Orbán’s control over the media in Hungary and his threats to critical journalists. A lot of media institutions which were critical of the Orbán Administration’s corruption were bought off, most of the media in Hungary portray only the self-serving opinion for the government. Prior to this election, Orbán has expressed extreme nationalist views that Hungary is Christian country which is threatened by an invasion of Islam and foreign capital, immigrants and Jews. In fact, Orbán’s win is a symbol of the present political climate and is the first case of a leader in Europe winning an election by depicting Jews as a national enemy since World War II.

On the other hand, many citizens welcome Orbán’s increasing power in Hungary. The reason is disappointment in the EU. People expected prosperity when they joined the EU, but in fact the EU made Hungary heavily compete with France and Germany. As a result, many farmers quit viticulture because they did not have enough power to compete with France and Germany and the vineyards in Hungary had decreased by a quarter compared with their highest peak. For citizens, joining the EU just caused a tragedy such as population drain and exclusive selection due to competition principle. Income level fell to one-third of the EU average and labour went to other western countries, especially in rural areas. It was during this situation that the refugee crisis happened in Europe, and the EU asked affiliate countries to accept over 1 million refugees. People in Hungary became angry and disappointed, and these feelings directly led to support for Orbán, a right-wing nationalist who opposes the EU. Orbán opposed refugees and immigrants from Islamic countries and built electric fences on the border in an effort to help stop deteriorating security and protect the value of Hungarian Christian society. People in Hungary think that Orbán is a necessary evil for protecting prosperity in Hungary. References newsweekjapan.jp/stories/world/2018/04/post-9942.php balkaninsight.com/2019/07/30/hungarys-orban-tries-to-give-illiberalism-a-makeover sankei.com/premium/news/180425/prm1804250006-n1.html nhk.or.jp/kokusaihoudou/archive/2019/08/0820.html www3.nhk.or.jp/news/html/20190607/k10011943661000.html