Should tech monopolies be broken up? 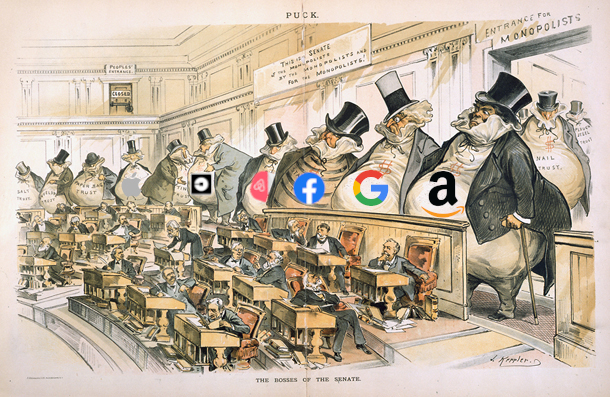 For some time there has been concern that the Tech Giants of Amazon, Apple, Google, Microsoft and Facebook carry out monopolistic practices and are actively harming pricing and/or competition. These biggest tech companies are all now so large in terms of market valuation they have eclipsed the Big Oil and Big Media companies that have dominated stock markets historically. These concerns have prompted antitrust investigations into various Big Tech companies in both the United States and the European Union. However issues of censorship, privacy, and free speech often get falsely intertwined with this subject as Big Tech companies have come under fire for an increasing number of reasons in recent years. Have the Big Tech broken antitrust legislation? What effect do these big companies have on competition? Do we need better tech company antitrust legislation? Could the domination of a few giant tech companies have any positive consequences? Should Big Tech be broken up?
Stats of Viewpoints
The breakup of Big Tech won't happen
0 agrees
0 disagrees
Yes, antitrust laws are broken and lacking
0 agrees
0 disagrees
Not monopoly but monopsony
0 agrees
0 disagrees
Viewpoints
Add New Viewpoint

Despite all the political attacks on the Big Tech firms government breakup looks extremely unlikely. The most important issue in American politics right now is the trade war with China, which is largely centred around technology, the US government is heavily focussed on US tech dominance, and this issue is bipartisan - it won't change with a Democrat administration. However the size and success of the Big Tech firms doesn't necessarily mean they violate antitrust law, how a monopoly is obtained or maintained is more significant here, not the mere fact of its existence.

However legislators could put more regulations in place to allow any online markets that suffer under the weight of Big Tech to become more competitive, as legal action is only usually taken against monopolistic companies that deal too much harm to competition. But as Big Tech is so instrumental to the US economy and US technological hegemony addressing competition is more likely than breaking up any of the associated companies. Lawmakers could establish regulatory standards for micro-payments for digital businesses, for example, which could fix the App Store issue that Epic Games is currently involved in a legal battle with Apple and Google over. Simply breaking these companies up may not be necessary, legal, or economically desirable and is therefore unlikely to happen, increasing competition would be much more conducive to US economic growth and is therefore the more likely outcome.

Concerning Big Tech, antitrust laws may have been broken and arguably need to go further in protecting consumers, competition and rights. Facebook was given permission by the US Federal Trade Commission (FTC) to acquire Instagram and Whatsapp, in 2012 and 2014 respectively. But the FTC have since backtracked and are currently investigating whether Facebook tired to acquire their rivals before or after they became a threat to their business. Many have argued however that these acquisitions shouldn't have been allowed to go ahead in the first place as the company was simply buying out their rivals to consolidate power over the market.

Deregulation under the Clinton administration, in the form of the Telecommunications Act of 1996, controversially allowed cross-ownership of media companies, and resulted in a drop in large media company competition from 50 to 6 companies during this periodI. As media giants are now transitioning to the Internet this picture is much worse, with only four media companies dominating communications and entertainment; Facebook, Apple, Google, and Amazon. To make matters worse companies like Facebook operate in an unusual position, with one person, CEO Mark Zuckerberg owning 56% of the company's shares. This gives Zuckerberg almost tyrannical command over how the company is run, from matters of privacy, free speech, to market dominance, all decided by one man.

Not monopoly but monopsony

The Big Tech companies often described as monopolies are not monopolistic but almost the opposite, a monopsony, with one entity having market dominance over sellers as the sole purchaser of goods and services, which may raise its own problems. Monopsony allows some Big Tech firms to demand artificially low prices from vendors, squeezing suppliers, leading to a decrease in the quality of a good or service, stagnating wages, or ultimately causing unsustainable dynamics that bankrupts suppliers. Monopsony is arguably more prevalent amongst the largest social media and online companies and just as damaging economically. For example such practices led to a 2019 supreme court ruling where Justice Brett Kavanaugh described Apple as "both a monopolist and a monopsonist" [1].

While low prices are generally seen as favourable, monopsonies artificially lower the price beyond their true cost, hurting competition by reducing diversity and innovation among suppliers. A good example is Apple’s app store, as the company only allows apps of approved developers on iPhones and iPads, the company also sets a market expectation for price by promoting cheaper or free apps hurting developers, and leading to the supreme court ruling against the company in 2019. Apple may face action over this decision, but may also face further charges, Kavanaugh wrote in 2019 “a retailer who is both a monopolist and a monopsonist may be liable to different classes of plaintiffs.” [2]