What can we learn from the Iraq War? 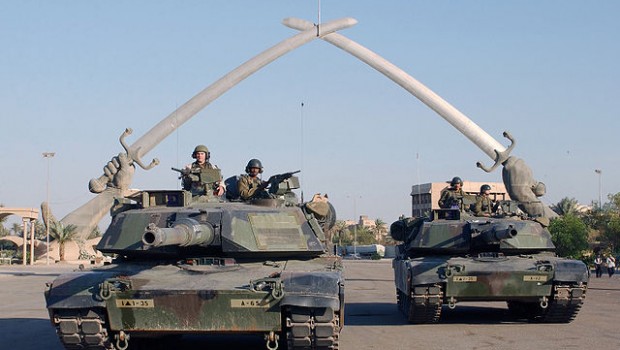 The most scandalous aspect of the Iraq War, of which there were many, is the amount of corporate war profiteering that occurred during the war. The Iraq war was privatised more than any other war in US history and companies such as Halliburton, Blackwater, KBR, CACI and Titan were involved in all aspects of the war other than fighting, supplying food, laundry, construction, security, intelligence and interrogation services. However it became clear that there was a severe lack of oversight of private military contractors in Iraq, which led to large scale war profiteering, and deep negligence that put the lives of Americans and Iraqis at risk.

A shocking disregard for human rights occurred during the Iraq war with allegations of torture, physical abuse, sexual abuse, rape, sodomy, and murder of prisoners being asserted by various humanitarian organisations against the United States Army, Central Intelligence Agency and Private Military Contractors. However assertions gave way to evidence when torture memos signed by politicians as high in the White House as then Secretary of Defence, Donald Rumsfeld, shone a light on the US government's approval of prolonged sleep deprivation, binding in stress positions, waterboarding and other acts widely regarded as torture. Act such as this were not just limited to the Iraq War, with torture being used in Afghanistan and Guantanamo Bay during the same period also. But evidence has since come forward of the wider use of torture operations carried out by the CIA at international black sites in at least 20 locations around the world making this the most shocking lesson to take from the Iraq War.

The Iraq War is believe by many to have been an intentional false flag, a covert operation that intended to use the horror generated by the 9/11 terror attacks and deceive countries of the US-led coalition into war, with US Defence Secretary Donald Rumsfeld deciding hours after the attack to “hit Saddam Hussein” despite no connection to the attack [1]. This deception was largely achieved through the media, a University of Maryland study found that the vast majority of news sources were pro-war [2], which led to large sections of the general public believing Iraq was responsible for 9/11, that evidence had already been found and that Saddam Hussein harboured weapons of mass destruction. The pretence for going into war was described by the UN Secretary General of the time, Kofi Annan, as illegal and a breach of the UN charter, despite this, and numerous scandals such as the mysterious death of a British weapons inspector, the war continued as did the scandals surrounding the media's coverage of it. From this it is clear the United States, Britain, Australia and Poland were guilty of carrying out an illegal war and war crimes for which they have never been held accountable, and the majority of media sources in these countries were complicit in their support of these war crimes by forgoing journalism and propagandising the Iraq War.

It has been made increasingly clear from a series of military operations in the Middle East, the Iraq War being one of them, that the difficulty of missions is far greater amongst divided societies, and that sectarianism can complicate wars to the point of making them seem futile. In the case of the Iraq War Saddam Hussein’s authoritarian pro-Sunni regime led to sharp divides in the country, made more complicated by a large Kurdish population, these divides became part of the war itself as Peshmerga forces formed part of the coalition that toppled Hussein’s regime. This meant that not only did a power vacuum follow the removal of this dictator, but it led to almost unmanageable societal divides that were made even more complicated by the osmosis of extremist militants from surrounding regions. This is something true of many other military operations across the Middle East such as Afghanistan Libya and Syria, and which is part of the reason why all of these regions are still lacking stability to this day.

The level of control exercised by the military-industrial-complex

This war was all played out in the name of western interference on the politics of the region, in order to gain greater control over the region resource-wise, while stopping a Shia majority country from forming good relations with Iran, thus minimising unfriendly nations in the region. However wars such as this cost more than they are worth, so the general public are misled into paying a bill in the name of a good cause, even if the cause is a lie. So in the interests of those that benefit from war, arms manufacturers, oil companies and organisations such as the pentagon that demand ever growing budgets that are indefinitely “mismanaged”, international laws such as the UN charter are broken. But the industry behind it is more than happy to break the law and is deeply embedded with lobbyists, government, military and secret services, in an effort to secure greater US hegemony in the region, something that will further guarantee the corrupt output of this industry at large.

Coalitions should be voted for, investigated, and headed by the UN.

It is unquestionable that the Iraq war cost hundreds of thousands of Iraqi civilian’s lives, thousands of American soldier’s lives, and nearly one trillion dollars, as well as facilitating a larger spread of Islamic terrorism in the Middle East. This was all despite the fact that the invasion violated international conventions, articles 41 and 42 of the UN charter, and this is all despite leading scholars warning of a rise insurgency and terrorism, and the links to al-Qaeda and weapons of mass destruction being debunked. Therefore, future military coalition forces should ALWAYS be voted on by the UN, full investigated prior to the start of operations, and run as a UN peacekeeping force. Anything that doesn’t operate in this way should be recognised as an infringement of international law and guilty parties should be held accountable by the International Criminal Court. commondreams.org/views/2010/09/11/iraq-democrats-war

The Iraq War was started for various reasons, many of which were consequently proven to be inaccurate, but ultimately the true aim was to topple Saddam Hussein’s regime. However, just as with Libya years later, deposing a dictator, with such a long history of using authoritarian power to subdue a divided population, can release a level of inter-community violence that is hard to control. In the case of Iraq there was an explosion of hostility between Sunni and Shia factions, and with the addition of US coalition mismanagement of the situation, some have even labelled this post war period as a sectarian civil war in Iraq.