Is Steve Bannon a threat to American politics? 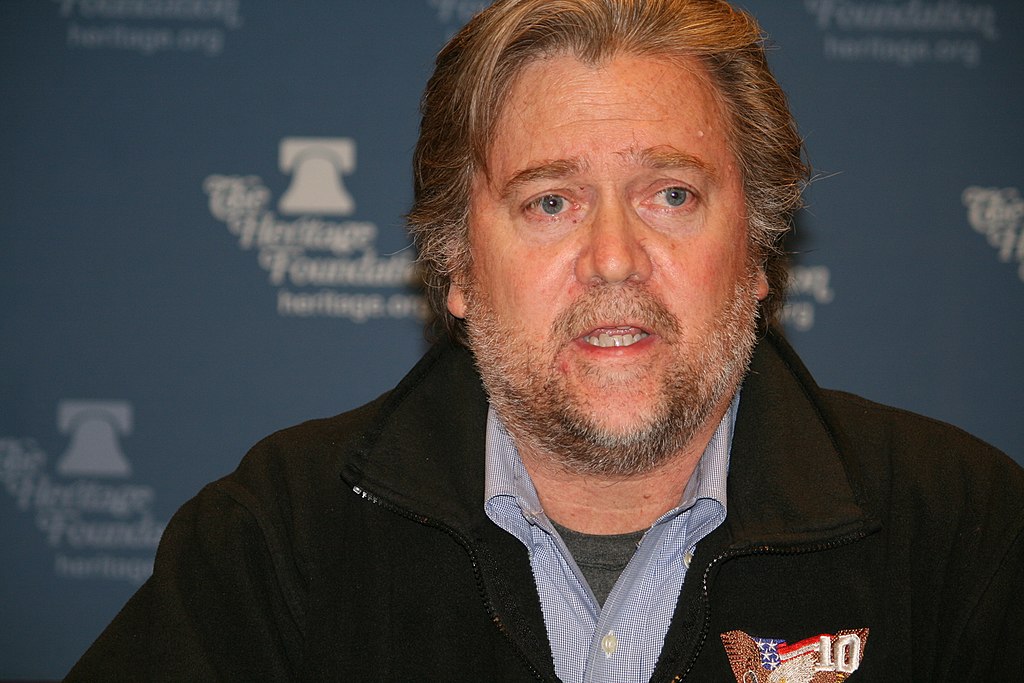 The United States House of Representatives established the U.S. House Select Committee to Investigate the January 6th Attack on the United States Capitol building on July 1st 2021 to determine exactly what led to the riot at the Capitol building and determine how to avoid such occurrences in the future. The US House of Representatives ordered Steve Bannon, former campaign manager and political advisor to the Trump administration, to appear before the House Select Committee on October 14th 2021, Bannon refused this subpoena and the House voted to hold him in criminal contempt of Congress on October 19th. Recently Bannon established a podcast the War Room, which was banned from several social media sites for Bannon calling for the beheading of Anthony Fauci, the government's chief medical advisor, and FBI Director Christopher Wray. In the months since the January 6th attack, Bannon is one of the few Trump staffers left continually pushing the narrative that the 2020 election was stolen and should be overturned, many mainstream media outlets have taken to publishing articles claiming Bannon is attempting to push the country into a second civil war. Does Steven Bannon really represent this level of threat to America? Should Bannon be prosecuted for failing to appear before the House Select Committee?
Stats of Viewpoints
Bannon's rhetoric is an honest reflection of American politics
0 agrees
0 disagrees
Bannon is normalizing crypto-extremist rhetoric
0 agrees
0 disagrees
No
0 agrees
0 disagrees
Yes
0 agrees
0 disagrees
Viewpoints
Add New Viewpoint

Bannon's rhetoric is an honest reflection of American politics

Yes, Bannon is a threat to any level of decency or civility, cryptically advocating for some sort of race-based civil war, but at the same time, he is just openly using the rhetoric of a political system that is structurally white supremacist, the American political system has racism baked in and has still not addressed its past. In this way Bannon is just using the language of white supremacist America, language that is heavily coded but still exists in US politics more than ever, in the country's legal system, in the country's incarceration system, and especially in the country's various water poisoning crises, like Flint, Michigan. America is a white supremacist state and actors like Steve Bannon are just people would talk about this and identify with this openly, while most other political actors make it their career to essentially stand for the same thing but veil these beliefs and defend the status quo behind denial, platitudes, or out right lies. Bannon is dangerous but at least somewhat honest, so we all know what we are dealing with, reform of the structural racism of the United States is much more difficult.

Bannon is such a huge support to the recent surge of white supremacy that is informing global politics, he has a dangerous influence espouses far-right beliefs that border on fascistic but are denied as soon as they are called out for what they are. Bannon has said the most extreme things including calling for the beheading of political foes, he encourages terrorism internationally though rhetoric that mirrors perfectly that of recent white supremacist terrorist murders. But actors like Bannon also represent a slight evolution of white ethno-nationalism, for Bannon "Jewish capitalists" are not an elite enemy class but a force for good, distinguishing Bannon from tradition of European far right anti-Semitism. However Bannon combines the ultraconservative apocalyptic visions of Christian fundamentalism, the far-right bandwagon that so many alt-right actors have jumped on switching their hatred from the Jewish community to Islam and immigration, all the while advocating for a second civil war. He is a dangerous figure and his influence needs to be taken more seriously.

The American government is a threat to democracy and open society, through threatening to imprison opposition actors the American left, aided by the Biden government, is taking the country down a similar route to rouge states like Venezuela. This select committee was formed through a party-line vote and therefore any conclusion they come to will just by hyper-partisan and politically divide the country even further, this will only ever be seen as a political attack on Biden's opponents and an attack on Trump who remains extremely popular. It will take years to actually charge Bannon with criminal contempt in what is likely to be lengthy and expensive litigation, when he clearly played no part in January 6th himself, have left the white house all the way back in August 2017, and having fair frosty relationship with Trump throughout 2020, this is just a waste of taxpayers money...

Yes, as a president Trump was more of an opportunist than an ideologue, Steven Bannon was Trump’s campaign guru and was there to plug the ideological holes in Trump’s presidency, but Bannon’s strategy was one of destruction, denial and misinformation. Bannon’s key strategy pushing misinformation and fear to try to divide Americans and generate overzealous support from one side of America’s already hyper-partisan political landscape, and this button pressing of America’s most misinformed and angry voters culminated in the literal mob violence and destruction that transpired on January 6th. Through this Select Committee Congress has the chance to reclaim the authority that was so badly eroded throughout the Trump presidency and decades of expanding presidential control. Holding Bannon to account over his disregard for the country’s political institutions and enforcing this subpoena sends a powerful message to both Bannon and Trump who continue to push the same misinformation that so easily led to a situation that could easily have turned into a larger act of terrorism or a coup d’etat.