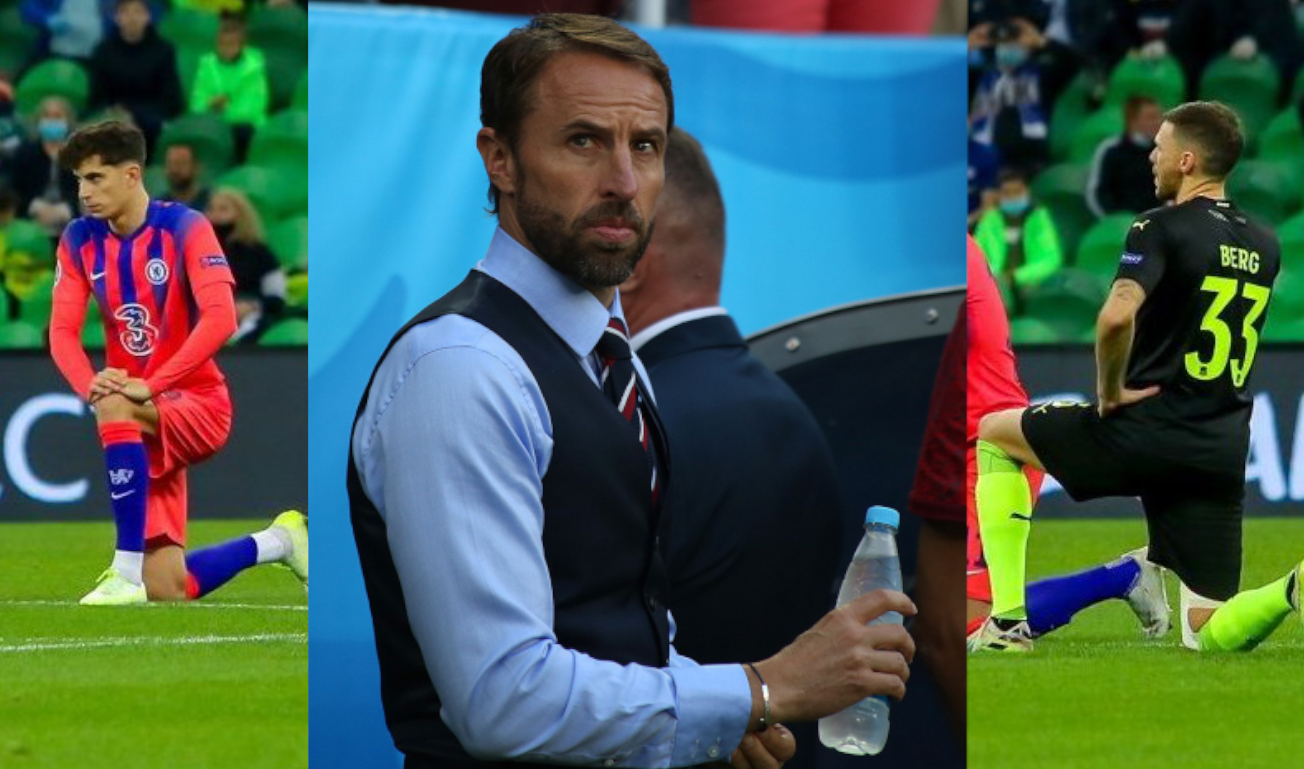 England played a friendly football match against Austria ahead of the Euro 2020 (postponed due to the COVID-19 for June to July 2021) on Wednesday 2nd June 2020, and before the game the entire England squad took a knee as an anti-racism gesture. This was the first game in front of fans for England in a year and the gesture was met with clear booing and jeering from fans at the stadium, and many on social media echoed this claiming that political gestures like taking a knee do not belong in sport. England has a diverse team and team manager Gareth Southgate lambasted fans that booed his players following the match, saying that they do not understand the message the gesture carried and that the team are all supporting each other by taking a knee. "Taking a knee" has become intertwined with the BLM movement, and in 2020 the UK's Premier League purposely distanced the organisation from Black Lives Matter by using unrelated slogans such as "No Room for Racism" on shirts. England players are expected to continue to take the knee in upcoming games. Are they players right to use this antiracism gesture? Or, as some fans have said, does politics have no place in sport? And was Gareth Southgate right to defend his players against these fans?
Stats of Viewpoints
Important moment in football's history
0 agrees
0 disagrees
No
0 agrees
0 disagrees
Yes
0 agrees
0 disagrees
Viewpoints
Add New Viewpoint

Racism in football has a long history, dating back to at least 1887 in the British press and a probably 1916 amongst football fans [1]. The 1980s were a deeply troubling time for British football, with hooliganism, racism, and violence permeated football culture, and black players and fans alike were subject to appalling levels of verbal and sometimes physical abuse. Considering its at times violent and deeply racist history, football has a huge potential to create meaningful change not only in sport but in society at large, if racism is rooted out of football it will be another avenue of society that racism is not allowed in, and another huge victory for the antiracism movement. For this reason not only the England team taking the knee, but also England Manager Gareth Southgate’s tacit defence of his players on this matter, is a historic sign of change and progress.

People are surrounded by cancel culture and politics in every facet of life these days, sport should be an escape from that and forcing politics into sport is misplaced. "Taking the knee" has become completely interwoven with the BLM movement, which in the UK has been criticised for being anti-Semitic and supporting ridiculous policies like defunding the police, furthermore the group have condoned and encouraged violent and illegal riots and protests. The UK's Premier League have already released a statement that they will not endorse such a political organisation and Gareth Southgate should have done the same. By taking the knee footballers are opening the door to such groups to hijack the antiracism movement in order to promote their own fringe political beliefs, footballers should not be allowing that and should concentrate on what they are there to do, play football.

It shows that England FC are moving with the times, anyone who doesn't think so must not have been paying attention to English football in the last year, as Gareth Southgate said himself "the majority of people understand it ... some people aren't quite understanding the message" [1]. Many other great political acts have been intertwined with football recently, whether it was Marcus Rashford singlehandedly forcing a government turn around on school meals during COVID, or Europe-wide protesting causing the end of the unpopular "Superleague". Footballers have even been openly political during the latest Israeli bombing of Gaza, when footballers from Leicester City waved the Palestinian flag after winning the FA Cup. At the end of the day they are a team and need to be together much more than just on the pitch, knowing their teammates fully support each other is part of team sports and will feed into good performances.