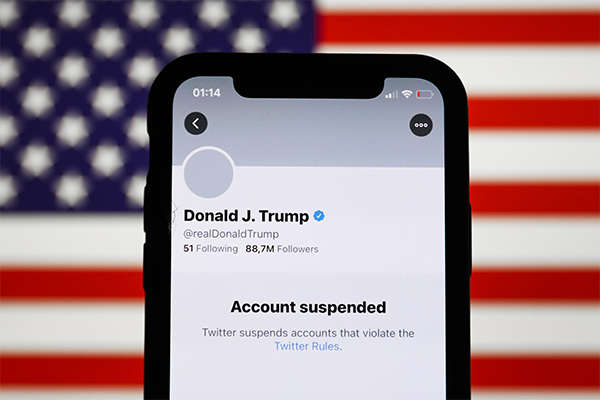 Following the 2021 US Capitol riot that lead to the deaths of five people, including a police officer and an Air Force veteran, Twitter permanently banned Donald Trump’s Twitter account due to “the risk of further incitement of violence” [1]. On the company’s blog a more detailed account was given for his permanent suspension, and two of Trump’s tweets were highlighted for a breach of the companies ‘Glorification of Violence’ policy. However many have called this move a breach of First Amendment rights to freedom of speech, while others questioned the validity of the platforms detailed justification for his suspension, considering the highlighted tweets do not directly incite violence. Were twitter right to ban Donald Trump’s account at this time? Is this censorship, a violation of the out-going president’s right to free speech, or is this necessary considering the threat of violence ahead of the upcoming inauguration of Joe Biden? [1] twitter.com/TwitterSafety/status/1347684877634838528?s=20 blog.twitter.com/en_us/topics/company/2020/suspension.html
Stats of Viewpoints
Yes, they are a private company
0 agrees
0 disagrees
No, it will embolden his most crazed supporters
0 agrees
0 disagrees
Viewpoints
Add New Viewpoint

Yes, they are a private company

Twitter are a private company and are therefore entitled to block anyone who breaks their user guidelines, guidelines that all users have signed up to when signing up for the service. Twitters legal case is strong as Trump has clearly incited violence telling his supporters to "fight like hell" or "if you don’t fight like Hell, you’re not going to have a country any more" [1], but this is a long time coming as Trump has had a history of breaking twitters guidelines. Private corporations are entitled to make a stand against fascism and violence in this way, and this is not limited to Twitter, or even tech companies, many companies have taken a stand against Trump's actions here and cut ties with him or his companies [2]. The argument that is censorship of Trump is also tenuous, as Trump is free to use traditional mechanisms that previous presidents have used to address the public and make his voice heard, i.e. the press conference, Donald Trump more than anyone is not a victim of censorship.

No, it will embolden his most crazed supporters

This action was not limited to Trump's main account, or even limited to twitter, with Trump blocked on Twitter, Facebook, YouTube, Instagram, Snapchat, and others, while accounts linked to Trump or Trump supporters were also suspended or limited. This is clearly censorship, a performative excuse to muzzle Trump who has tweeted much more direct incitements of violence in the past - “when the looting starts the shooting starts” [1], why was he not in violation of Twitter, or any other company's, policy then? These social media companies have most likely decided that at the end of Trump's time as president, they no longer need to tread carefully, the fear of harsh retaliatory regulation has been lifted. But this just emboldens Trump supporters when he finally looked defeated, and plays into the hands of his most crazed followers who have pushed conspiracy theories of a liberal-media or deep-state effort to erode free speech for the entirety of his presidency.