Is Biden really pulling out of Afghanistan? 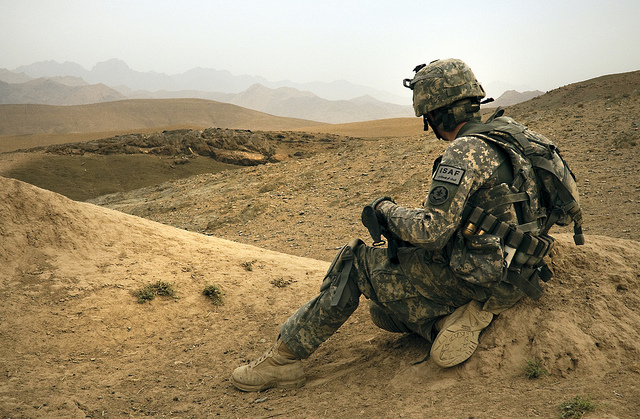 On the 14th April 2021 US President Joe Biden announced that the US military would begin to withdraw from Afghanistan on May 1st and completely withdraw from the country by September 11th, to mark the 20th anniversary of the 2001 World Trade Centre and Pentagon terror attacks. However this announcement, while welcomed by many, was divisive and raised concerns for others, with some even calling the withdrawal plan itself into question for various reasons. Indeed previous president Donald Trump attempted to orchestrate a withdrawal to end the “forever wars” and was met with resistance, even Biden’s withdrawal start date of May 1st was the original withdrawal deadline negotiated by Trump with the Defence Department before leaving office. So, will Biden really follow through on pulling out of Afghanistan? What issues will stand in his way, either way?
Stats of Viewpoints
Yes – he said so
0 agrees
0 disagrees
No – just privatising the occupation
0 agrees
0 disagrees
He cannot
0 agrees
0 disagrees
Viewpoints
Add New Viewpoint

Biden vowed to carry out the Trump era foreign policy decision when he took office as the decision was an extremely popular one amongst Americans and even veterans. The United States has achieved the original objectives set out when occupying the country in 2001, Osama bin Laden is dead and activities of al-Qaeda and other terror groups has been vastly diminished in Afghanistan. Most Americans now believe it is time to end the forever wars and Afghanistan is the most flagrant example of a war that has become more of a continuously profitable venture for large American weapons industry and a bloated US Defence Department.

Biden was ultimately proven right to stick to withdrawing from Afghanistan by the abdication of the President President Ashraf Ghani and the Afghan government, as Kabul fell to the Taliban and the military passively surrendered without a fight. Despite harsh criticism for the disorganised withdrawal Biden stood by his decision, blaming the Afghan President and Afghan forces for not fighting to defend their country. If, after 20 years, the US nation-building exercise in Afghanistan seemingly fell in a day, then Biden was justified in leaving the country, staying would have been endlessly throwing American money and lives into a project that Afghan citizens themselves were not even committed to.

No – just privatising the occupation

Biden's plan is not to withdraw from Afghanistan but to full privatise the US military presence there, to keep up the illusion of withdrawing without losing influence in the region. Biden has aimed to withdraw the 2,500 official US troops and the additional 6,000 NATO troops, but as of January 2021 over 18,000 private military contractors remain in Afghanistan according to a Defense Department report, including US Special Forces, mercenaries, and intelligence operatives. One of these companies that profited from this arrangement is DynCorp International, which received 69 percent of all State Department funding between 2002 and 2013, adding up to over $7 billion in government contracts by 2019.

These contracts are unlikely to change regardless of which way the political winds are blowing, especially baring in mind a leaked internal Pentagon memo referring to Afghanistan as the “Saudi Arabia of lithium” and the massive reserves of gold, iron, copper, cobalt and many other precious [1]. These personnel will still be able to man drones and aircraft, aircraft carriers in the region, or operate cruise missiles based on ships and submarines in Afghanistan. The CIA and Special Forces have become intwined in tribal conflict and sectarian feuds in Afghanistan and covert missions will probably continue despite the US winding down in Afghanistan, much like they did historically in Laos. This is something we have seen even as the US has started leaving Afghanistan, American military contractor firms are advertising hundreds of new jobs in the country despite everyone in the world solely concentrating on the evacuation of US troops.

The American footprint in Afghanistan was always relatively small, the number of casualties low and like in Germany, South Korea, and Japan the US could have maintained a skeleton force in Afghanistan to keep the peace long term. This would have helped breed further generations of liberal Afghans that would one day have the strength, organisation, and fortitude to fight for an open liberal society against the oppressive forces of Afghanistan's tribal countryside population. But with the bigger picture aside, Biden needed to have stayed in Afghanistan to help women and the ethnic minorities that suffered the worst crimes under the ethnically Pashtun Taliban, that have demonstrated from 1996 until 2001 that they are capable of cultural genocide and harsh ethnic and gender oppression.

Through a hasty withdrawal from Afghanistan Biden risks civil war, according to Republican Senator Jim Inhofe, and Inhofe has been sadly proven right following the fall of Kabul on August 15th 2021 and a subsequent hasty withdrawal of troops and personnel. We have already seen Afghans protesting the Taliban's capture of Kabul by hanging the Afghan flag from public monuments and further protests are more than likely moving forward. Now those who have worked with the US will suffer following this sudden withdrawal, and it is currently not clear if the US or the Taliban will prove safe passage to these real victims of the US withdrawal from Afghanistan.