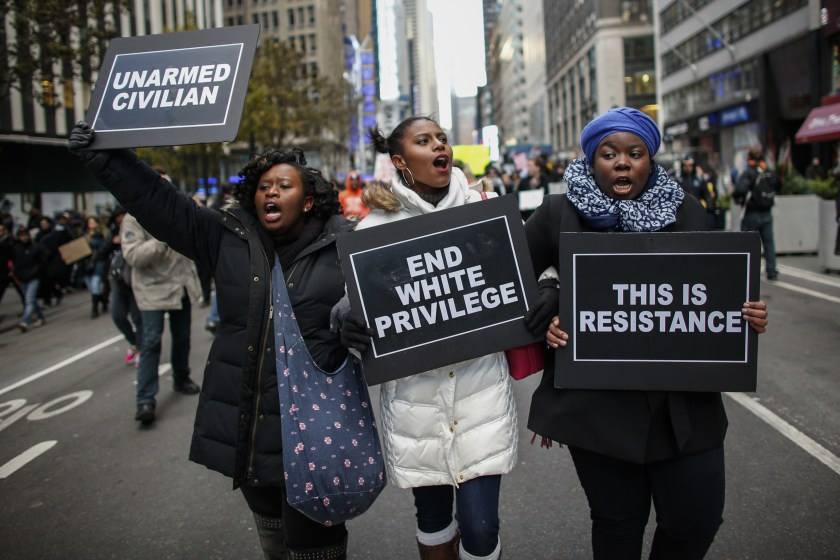 Although having much earlier roots, eugenics was an emergent pseudoscientific belief of the early 20th century that used science of the times to justify racial superiority ideologies. The idea was taken to its extreme in Nazi Germany but Hitler was largely inspired by the first forced sterilisation policies that were pioneered in the US, California’s “Asexualization Acts”, Buck v. Bell (1927) and various anti-miscegenation laws. Eugenics became a intrinsically intertwined with American thinking through the long instigation of such policies, and despite being debunked scientifically eugenics thinking lives on today in largely unspoken form. Whether it's Donald Trump’s obsessive rhetoric about his counterparts having good genes or bloodlines, or the continued use of sterilisation to reduce the sentencing of convicts, who are more likely to be black due to racial disparities of the American justice system, eugenics continues to be the theory that underpins a place of privilege for white Americans in modern US society.

Not just the US, such privileges are worldwide

The prolific author, civil rights activist, sociologist, historian, and a founder of the NAACP, William Edward Burghardt Du Bois offered a nuanced analysis of racist entitlement in the United States, but for Du Bois white supremacy was a global dynamic, and in this way white privilege is not just an American problem. Colorism is a firmly rooted global issue, from Asia to Europe, with a long history of privileged elites being able to avoid outside labour, so lighter skin has become associated with privilege in many societies, even to the point where skin bleaching creams are commonly sold in Asia, Africa and the Caribbean. While it can be argued that white and light skin privilege are largely different phenomenon they largely have their roots in the white supremacy of colonialism or are affected by it, the United States is merely one of many post-colonial societies that is home to skin tone privileges of many degrees.

The crack and cocaine incarceration differential

Racial double standards have been codified into the United States' drug laws and justice system, laid down in the "crack crisis" of the 80s in the form of the Anti-Drug Abuse Act of 1986, aggravated by the War on Drugs and still firmly in place today. In the 80s crack cocaine was seen as a street drug while powder cocaine was fuelling Wall Street despited them essentially being the same thing, but the Anti-Drug Abuse Act gave the same sentence for possession of 5 grams of crack to that of 500 grams of cocaine. This literally left white drug users in America in a privileged position, and even though federal statistics prove most crack users are white, black offenders were 13 times more likely to be put in prison between 1991-1995 and 7 times more likely from 1991-2016. This dynamic is still playing out with crack cocaine, but is now repeating and more starkly illustrated comparing the ongoing 'war' on crack addiction versus large campaigns of 'compassion' and blame on pharmaceutical companies for the opioid epidemic that's swept the US in the last decade.

In the United States racial segregation was codified in a set of state and local laws in the Democratic dominated southern states in order to politically and economically marginalise black people and cement a privileged place permanently in society for those with white skin. From the abolition of slavery in 1865 until the Supreme Court overruled them a hundred years later, Jim Crow laws shaped US society in the southern states, preserving slavery dynamics by locking black citizens into indentured servitude. Such laws legally and politically privileging whites also by removed voting rights from African Americans, controlled where they lived, how they traveled, and even seized children for labour purposes. Furthermore Jim Crow laws established the foundation of legal impunity that brought forth white supremacist terrorism of the groups like the Ku Klux Klan, that carried out the lynchings in plain sight.

Discrimination in the armed forces

In addition to a history of appalling treatment both on the battlefield and at home, there were also systemic hurdles that black veterans faced that helped to solidify economic and social inequality and supported white privilege, following the Second World War. Lawmakers began writing the GI Bill in 1944 before the war ended, and Southern Democrats seized on the ideas of Jim Crow and New Deal legislation to build racial inequality into the bill, in order to stop black war heroes coming home and campaigning for civil rights. Chair of the House Veterans Committee, Mississippi Congressman John Rankin, was one such politician, an ardent racist, Rankin insisted the programs of the GI Bill were left to state governments, many of which still enforced Jim Crow laws. Veterans came home to promises of housing and education that refused to be delivered upon, whether because of segregated facilities, intimidation or violence, black veterans were denied what the GI Bill was meant to provide to veterans, and it therefore only furthered white privilege.

Problems with the concept

While some would be reactionary and argue there is no such thing as white privilege in the United States, it is important to note there is problems with the concept that have been noted in academia, and the term is possible too nebulous to aid the understanding of history. The problem of acknowledging both the diversity of differing groups of ethnicities as simply "white" people and "black" people can lead to many problems and oversimplifications. Some commentators have pointed out the concept of "white privilege" ignores important differences in white subpopulations and individuals, and many propose alternative definitions of what constitutes white privilege, for example factoring in class or ethnic origin. While such terms may seem elucidatory they may in fact obscure some of the finer nuances of racial, social, economic and political differences in American society.

Agree
Disagree
Latest conversation
D H
Approved
DH edited this paragraph
While some would be reactionary and argue there is no such thing as white privilege in the United States, it is important to note there is problems with the concept that have been noted in academia, and the term is possible too nebulous to aid the understanding of history. The problem of acknowledging both the diversity of differing groups of ethnicities as simply "white" people and "black" people can lead to many problems and oversimplifications. Some commentators have pointed out the concept of "white privilege" ignores important differences in white subpopulations and individuals, and many propose alternative definitions of what constitutes white privilege, for example factoring in class or ethnic origin. While such terms may seem elucidatory they may in fact obscure some of the finer nuances of racial, social, economic and political differences in American society.

The great depression hit black Americans harder than their white counterparts, with African Americans experiencing a massive 50% unemployment to the 30% of white Americans. But while some of the New Deal programs benefitted African Americans, some were aimed solely at white Americans and helped to solidify America’s history of racial segregation for future generations. The Federal Housing Program rejected black Americans from housing loans, with the Federal Hosing Administration’s manual explicitly warning of it being risky to invest in largely black communities, which helped to ensure the subsidy went almost entirely to white Americans. The legacy of the New Deal’s National Housing Act of 1934 helped to reinforce modern housing segregation with black communities largely being walled off from white neighbourhoods by highways, something that has reinforced housing privileges for white Americans from nearly a century ago.

Terrorism is always carried out to achieve political ends, something that is all too commonly overlooked in this era of modern suicide terror attacks. The terrorism of white supremacist lynchings and of the Ku Klux Klan, far from just being simply inspired by racism, were most often political in nature, and helped generate white privilege in modern American society. Such white supremacist terrorism exploded in the form of race riots and racial massacres, such as the 1921 Tulsa race massacre or the 1919 Red Summer that were used to systematically repress the black population politically, socially and economically. These large-scale massacres and terror attacks ignited over a background of randomised lynchings and attacks carried out by terror organisations such as the Ku Klux Klan, who often targeted whites who supported black rights also, in order to maintain fear, racial segregation, and repress civil right movements. This is a legacy that continues to this day, with a background fear maintained by an institutionally racist police force, that also aids in the repression of civil rights movements and keeps African Americans politically, socially and economically disenfranchised.

In the shadow of the Civil War and the abolition of slavery, sharecropping became a common way for impoverished farmers to scrape out a living from someone else’s land, usually sharing half of the crops grown with the landowner in a system that left the poor trapped in poverty. While both poverty-stricken black and white farmers were trapped into never-ending debt agreements with landlords, lingering vagrancy laws, that allowed police in states such as North Carolina to arrest unemployed black people and send them to prison farms to work for free, simultaneously reinforced the vestiges of slavery. In this way sharecropping functioned as an aggressive post-slavery form of slavery, and similarly the modern US prison system arguably still functions in a very similar way today. Prison labour is still a massive industry in the country, effectively keeping the dynamics of slavery alive today and maintaining a different experience in modern America based largely on a person's skin colour.

This widely held concept helped to justify the genocide against Native Americans, with many settlers thinking the Westward expansion of white settlers across North America was their destiny throughout the 19th century. Although historians point to this as a minority belief of the political class of the period, it did however inspire the movement of settlers of European decent westward across the entire North American continent, socially homogenising the region as they went. Much of the deaths in this era were the result of taking away land from native populations and diseases such as small pox, but violence played a significant role, and such ideas of racial dominance even inspired Adolf Hitler’s imperial expansion across Eastern Europe in the following century. Such ideas of a privileged white settler who is obliged to dominate and civilise the indigenous savages informed American imperialism both at home and abroad also, solidifying a racism deep in the heart of American domestic and foreign political policy.

A country built on slavery and colonialism

The United States was born as a European colonial project and relied more heavily on slavery that any other colony, racism helped to establish these systems the fact that the country was founded on slavery and colonialism has undoubtedly helped to solidify racism deeply within American society. During the American Civil War much of the country was willing to go to war to preserve this system of industrialised slavery that had made the United States so prosperous, but this long dark history of racism was only further crystallised even as slavery was being abolished in America. Those set to abolish slavery were satisfied with protecting a privileged place for white people in American society, by allowing the enactment of laws such as Jim Crow that literally made non-whites second class citizens in many states. More than anything else it is this very foundational history of the United States that set the stage for white privilege in modern American society, and the modern backlash against concepts such as white privilege, what some have labelled white fragility, is evidence that in many Americans minds attitudes toward race have not developed much since the civil war.