Did Malthusian logic cause the Great Irish Famine? 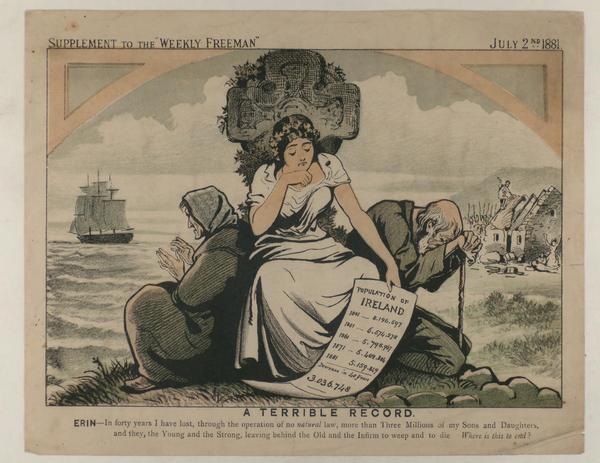 Ireland suffered under a devastating famine from 1845-9 in which millions died and fled the country, causing a drop in Irish population by a quarter, and causing long-lasting negative socio-economic and demographic effects on the country. At the time the economic theories of English Reverend Thomas Robert Malthus were politically popular and generally accepted to be true. Basically speaking Malthus posited that rising GDP per capita leads to rise in population, and raising populations in turn lead to falling GDP per capita, and if population increases at too high a rate a Malthusian catastrophe will occur in the form of disease, war or famine. Malthusianism has been demonstrated to not be an inaccurate model of modern societies, where technology has allowed food production to rise with population. But many historians have argued that adherence to Malthusian thought exacerbated the famine in Ireland. At the time Ireland was ruled by the Westminster Government of the United Kingdom of Great Britain and Ireland, and the English political class used Malthus’ theory to frame and justify the famine as a natural “Malthusian catastrophe” caused by population growth, not government policy. Was Malthusianism the main stimulus for the Great Irish Famine? Did Malthusian thought influence the Great Irish Famine? Or is this connection somewhat tenuous?
Stats of Viewpoints
Yes
0 agrees
0 disagrees
Viewpoints
Add New Viewpoint

Malthusianism was widely held to the pinnacle of political economic theory at the time of the Irish Famine, with economic progress seen as dependent on getting rid of surplus populations, as food supply could not keep up with population growth if left unchecked. Disciples of Malthus viewed the famine as a simple question of overpopulation, believing “the careless, squalid, un-aspiring Irishman multipl[y] like rabbits” [1]. In fact Charles Trevelyan, Assistant Secretary to the Treasury believed the Irish were “a primitive people who had developed neither the means nor the aptitude for proper economic development”, regarding the famine as divine intervention that would have eventual benefits to the prosperity of British colonialism [2]. The connection between the prevailing Malthusian thought of the day and the reluctance to act is so strong even former British Prime Minister Tony Blair officially apologised for the British Government’s doing “too little” in response to the Irish Potato Famine [3].